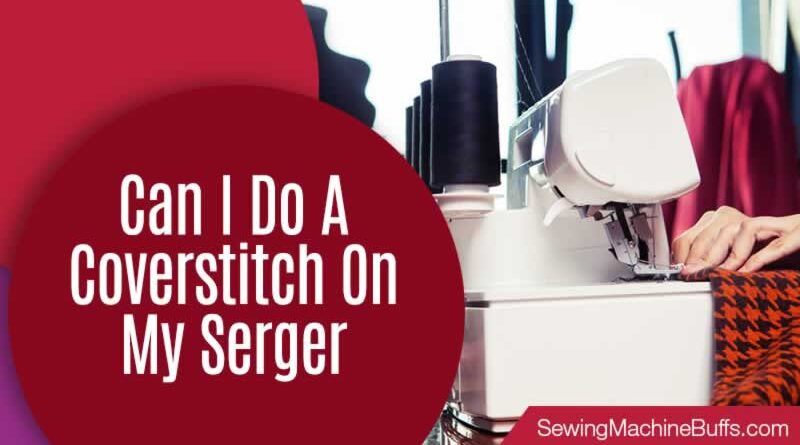 Ever wondered what makes those stitches on your T-shirt hem? They look cool and neat, don’t they? What’s even cooler is that you get to know them by name. They are called cover stitches and are the two rows of parallel stitching on the top of your hem and a looper stitch covering the fabric raw edge on the backside.

It’s precisely the kind of stitch you’d want to try out on your sewing project to achieve neat necklines and hems. And when you want strength and stretchability, what is better than a coverstitch that kills both birds with one stone? It is a lovely stitch pattern to use and pleasing to stare at as well. It gives a crisp, decent, and professional finish to your knit garments and other sewing projects. You can make cover stitches using a variety of machines.

Can I Do a Cover Stitch on My Serger?

Yes, of course, you can! A serger does a great job of making cover stitches and giving a pleasant, professional look. Sergers come either with a cover stitch feature or without, and working with the former is very easy. A lot of work, however, is required with the latter! It’s possible.

How to Make a Cover Stitch With a Serger?

If your serger machine doesn’t have the coverstitch option, it might be a little complicated to achieve the result. However, as skills go, once you get down to it and master the skill, it gets significantly more manageable, and the process speeds up.

Here’s a step by step method on how to go about it;

Step 1: Set up the serger first. Then, thread the needles, and then rotate the hand heel one full turn towards you.

Step 2: Once you do this, slide the tweezers’ tip under the presser foot. It will help you drag the needle threads under the foot.

Step 3: Place the cloth to be sewed with the right side up and under the foot. After that, you can begin sewing.

Step 4: This is very important. Don’t sew the material to make a chain. If you don’t discontinue with it at the end of the material, it will break the thread. It will force you to rethread the machine, and wouldn’t that be awful?

Step 5: At the thread’s end, spin the handwheel once more until the needles reach their uppermost point. Then release the thread.

Step 6: After this, raise the presser foot and only then use tweezers to pull the needles towards you.

Step 7: On both needles, ensure that you get around a 4 inch tail. To achieve this, you may have to cut the threads to create the tails. It’s a lot of work, but you need it to get the right coverstitch to work well on your serger.

Step 8: After doing this, pull the fabric gently from the presser foot. It will lift the looper thread. Now, you can cut it off directly. The needle thread drags the opposite side around your cover stitch.

How to Make a Cover Stitch With a Sewing Machine?

Did you know that you can also make a cover stitch with your sewing machine? Go for the Twin Needle! It is a needle shaft with two needles. You can insert it in a standard zigzag sewing machine just like any other needle.

Step 1: Change Presser Foot and needle- As mentioned above, you’ll need to change your standard needle and replace it with your twin needle.

Step 2: Now, take away the presser foot and restore it with a zigzag foot. There’s usually a little push button on the machine that allows for this change.

Step 3: Thread the usual pool of thread, making sure to have it going clockwise around the spool. This thread goes behind the needle bar thread guide just the same way it would be on an ordinary needle. You then pull the thread under and place it into the right needle. After doing this, pull it through the needle but don’t put it underneath the presser foot, as is the case with regular sewing.

Step 4: Here, you’ll need an extra pool pin and thread, which you’ll add to a different slot on the machine. Thread this as well, making sure that it’s also moving in a clockwise direction. This thread does not go behind the needle bar thread guide but instead just goes through the left needle. Take the excess of it and place it with the other thread (Also not to be placed under the presser foot).

Step 5: Lastly, once everything is in place, your twin needle is ready to sew! It is advisable to check your manual to what types of stitches your twin needle is can produce. A standard straight stitch will create the cover stitch. Looking beneath, you’ll see a beautiful zigzag ladder-like stitch which looks just as professional as one made by a serger or a cover stitch machine. It is robust, flexible, and works great for sewing clothing.

When sewing, take your time and test settings such as tension before beginning the sewing process. It saves you a lot of disappointment. You could use a wooly nylon thread as the bobbin thread for more elasticity on the seam.

How to Lock Your Cover Stitch?

Sewing is an exciting but not very glamorous activity, and you most definitely don’t want to get frustrated while at it. Knowing how to lock your cover stitch, therefore, is an essential skill to have. It makes beginning the next stitch easier, and your transitioning process hence becomes seamless.

Step 1: At all times, start and finish sewing with the fabric underneath the needles. When done sewing, rotate the handwheel to have the needles at the highest position, then raise the presser foot.

Step 2: Grab the needle threads with the help of tweezers. Now, moving at the back of the needles, drag the threads out from below the foot. However, it might still create a loop by means of the looper thread.

Step 3: Drag the threads to the front of your machine and cut their ends making sure you get a tail of at least 4 inches.

Step 4: Then start moving your fabric towards the back of your machine. It will loosen the looper thread, and drag the needle thread tails below the material. It is where they get locked. You then trim the remaining looper thread again, leaving a trail of around 4-inch. That is how to lock your cover stitch threads!

Make this a habit, and you’ll always have the correct number of threads to begin the next stitch. What’s more, there won’t be any tangling or breaking.

You can pull the stitches you began with to the backside of the fabric after you finish sewing the seam. That makes it neater and helps lock the stitches in place, but the stitch doesn’t usually detangle at the beginning, only at the end.

What Hems Can You Cover Stitch on Your Serger?

Whether three thread, two thread, or chain stitch, you get to decide on it based on the number of needles and the finish desired. But all are possible. If you need high-end detailing, then three thread three needles are definitely your go-to hem. 2 needle hems are right quick-finish hems, and the chain stitch can be used for decoration or as a temporary seam that can be removed quickly.

Do You Need a Cover Stitch Machine When You Have a Serger?

A serger combination allows you to perform both serger functions and cover-stitching. The drawback to it is that the switch over between the features is quite tasking. It could cause frustration and time wastage. However, you may want to have two separate machines for convenience as it works better in the long run. 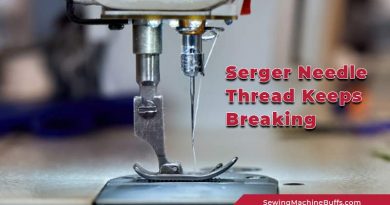 How To Do A Serger Stitch On A Sewing Machine How to Hem a T-shirt With a Serger