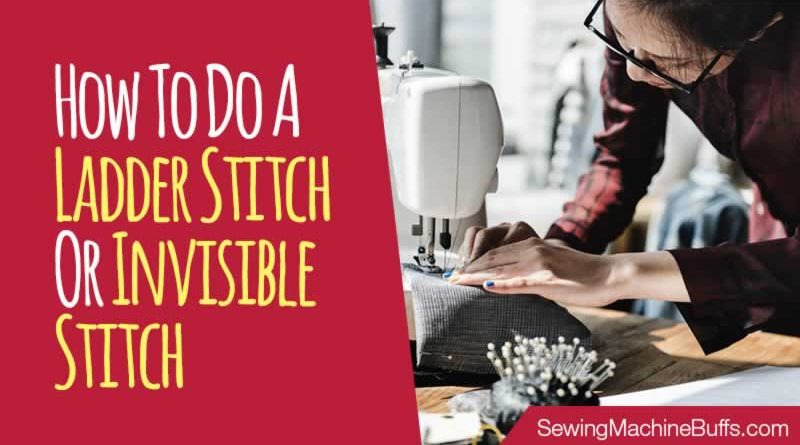 A ladder stitch is a stitching procedure and is often used to accomplish the project requiring the open seam for stuffing and turning. It is also used to sew stuffed toys, lined hems, and pillows.

You need to begin sewing around the project’s perimeter with the sewing machine and then finish it to four inches with the hidden ladder stitch.

Let’s begin with the guide.

How To Do A Ladder Stitch Or Invisible Stitch?

The invisible stitch or ladder stitch is an essential technique used to create the seam gaps’ invisible closure. It is used in ripped seams, sew toys, and clothing manufacturing to close the gaps.

Several names like slip stitch, ladder stitch, blind stitch, and more are often known. All these names refer to the same stitch that closes the seams and is nearly invisible after completion.

You might have seen them in stuffed toys, mending in hats or pillows. Wonder how to do an invisible stitch?

First, you should start by threading the project needle with either the single or the double thread and knot the thread from its end, to begin with, the ladder or invisible stitching process.

You might have seen several tutorial videos for how to knot or how to insert, and that’s pretty simple. Just wet the thread from the beginning and enter it inside the needle’s opening. You need to use the matching thread as per your fabric to attain the proper invisible stitch.

Besides, another thing to keep in mind is that you need to select the fine thread of good quality as when you will be gently pulling the thread, it should not break halfway without completing the project work.

To get the ladder stitch appropriately done, you need to start stitching and then pull the thread gently without breaking it in the middle, and at last, give it an ending knot.

Let’s have detail on how to do a ladder stitch or invisible stitch properly.

Steps To Do A Ladder Stitch or Invisible Stitch

Step 1 – Gather All The Supplies

To begin with the invisible stitching, you need to gather all the required supplies. You will need a thread, a needle, and your project.

You should be considerate about the type of needle you want as per your project requirements, but you need something that is not too thick and longish.

It would be best if you do all these that won’t make you crazy while threading it.

Step 2 – Consider the direction of the stitching.

Insert the thread in the needle through the central opening on the right through the top fold. This will hide the thread knot inside the project work. It should be stitched from right to left rather than left to right.

While stitching, you will notice the directions you are sewing, that is, right to the left. If you are right-handed, it would be your appropriate direction, and if you are left-handed, you may find it accessible and easier to reverse the stitching direction.

Step 3 – Press the Raw Edges In

Before starting stitching, you need to make sure that you have clean edges of the fabric. Press the edges in the opening so they stay straight in line with the earlier sewed seams.

Next, you need to thread the needle, pull the thread at the bottom to have a double strand of it, and knot it at the end together.

Take the stitch on the fabric’s inner flap where it would not show to the thread securely. Make sure you won’t catch the fabric’s face on the outer part.

Retake the second stitch flab and come at the top through the folded edge at the point where the stitching seam ends.

Again, pull the thread, and you will see the double strand of the thread emerging from the knife-edge of the folded edge of the fabric next to its beginning.

You need to take the tiny stitch along the fabric’s fold on the opposite side of the fabric. This is from point 2 to point 3 and while doing so, notice how point 2 is directly opposite to point 1.

The stitches in the step are approximately 6 millimeters or one-fourth inches in length so that you could see how to perform the invisible stitch.

You will also want to stitch yours as one-eighth inches or 3 millimeters. The smaller the stitches you will stitch, is more it will blend into the seam with the most minimal gaps.

After so, you need to pass the needle across the actual side and fold the fabric again from point 4 to point 5. It would be best if you take your stitch over the knife-edge of the folded fabric and pull through it.

Next, you need to take the second stitch via the opposite side while trying to line up the stitch to start across from the other end of the stitch.

Step 7 – Continue stitching and pull out the thread

With every 2-3 stitches, you need to pull the thread to close its opening and hide the stitching. You need to pull it out gently and if you go for a tight one, try pulling the stitches closed after you come to an end.

It would be best if you take some stitches and then pull out or stitch the thread again.

Remember not to leave the thread for too long before pulling it out, as the thread can get tangled sometimes in between the process.

If you are sewing the cushion or toy with some inner stuffings, you need to ensure that the stuffing fibers would not poke out of the holes. You will also be required to push the stuffing back inside the toy as you go ahead.

Step 8 – check out the ladder.

Step 9 – knot off the thread and finish the stitching

When you are coming to the end of stitching, you need to knot the thread off like you would have done generally with other stitching procedures.

If you are a beginner, it is done by leaving the loop in your last stitching, and after doing so, you need to put the needle back via the loop. At last, pull it tightly.

Remember, you should not cut the thread because you need to hide the thread’s ends in the project. You can pass the thread via the opening and into the project, coming up to a short distance far.

After that, cut off the thread, and if you pull a little before cutting the thread, the thread will again pull inside when released, hiding the evidence after the completion.

Here, you can also use the ladder stitch to close the legs to make them almost invisible.

The blind hem can be sewed on the regular sewing machine and is somehow invisible on the right side when you are using a similar colored thread. 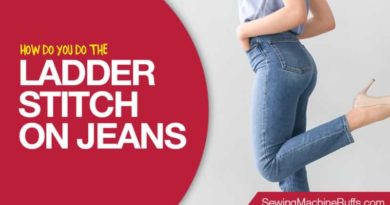 How Do You Do The Ladder Stitch On Jeans 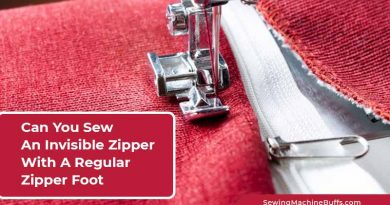 Can You Sew An Invisible Zipper With A Regular Zipper Foot