Threading a brother sewing machine can be a bit confusing if you are not familiar with the machine’s threading mechanism. You not only have to guide the thread through a series of hooks but also have to ensure that thread is automatically guided through the eye of the needle. However, you only need to learn how to do it once and you will be doing it without much thought afterwards.

How to Thread A Brother Sewing Machine

Perhaps it would be easier if you approached the task through a simple step by step process. Threading a brother machine might seem a bit daunting at first but you will find it quite easy to do once you get the full picture and do it a couple of times.

Step 1. Lift The Presser Foot on Your Brother Sewing Machine

Assuming you have a new spool of thread to replace a depleted one, this next step is simply swapping the old one with the new. All brother machines have a spool pin at the top secured by a spool cap. Just slide the spool cap out and remove any depleted spool. Next, slide your new spool into the spool pin to the end and replace the spool cap to secure the spool.

Pull a strand of thread long enough to loop through all the hooks provided in the sewing machine head. A meter or so is enough for threading a standard brother machine. You can make a good estimate based on the length of your machine’s hooking mechanism, although it’s always advisable to leave a good allowance.

This step involves guiding the thread you just pulled through a series of hooks on the machine head. Luckily, all Brother sewing machines have a diagram printed at the top to help you when threading. Hook the thread horizontally at the top following the printed guidelines at the top.

Next, you will need to guide your thread through a very specific path on the back and front of the head. Move the free thread around the back hooking it on the top hook and then bring it to the front on the left side with a vertical opening known as the thread guide. Move it up around the upper tension control and the thread take-up lever and then down on the same path to the needle level.

Step 4.2:  Next, locate the up/down button on your Brother machine and push the down button first followed by the up button. This will make the needle go down and then come up assuming you had put it in the default “up position” at the beginning so that it lines up with the threader hook for the next step.

Check the direction of the loop and pull your thread through the eye until the tail goes through to the other side of the eye. At this point, you will have completed the threading process and ready to start sewing. Finish the job by releasing the presser foot to start using the thread. Of course, you’ll still need to ensure that the bobbin is properly set and ready to serve the bottom thread to create a complete stitch.

Things to Be Aware of When Threading Your Machine

Hooking mechanism- Ensure that you follow all the steps printed at the top of the machine when hooking your thread and guiding it to the needle. Missing one hook will cause problems later when you start sewing.

Setting the tension– You don’t have to worry about setting the thread tension at this point. Brother machines have a different mechanism that allows you to alter the tension at any time after threading.

How Do You Thread the Upper Thread on A Brother Sewing Machine?

Threading the upper part of a Brother is quite easy. You only need to put a new spool, secure it and follow the printed guidelines on the top of the head to hook the thread through three or four hooking points. You will then bring it up and around the thread take-up lever before proceeding to the bottom part of the sewing machine and threading the needle.

What Thread Is Best for Brother Sewing Machine?

Most Brother machines can work with a wide variety of threads including silks, cotton, polyesters, rayon among others. The type of thread you will use depends on the job you are currently doing and not the machine. For instance, you may need cotton or silk thread varieties for embroidery jobs. 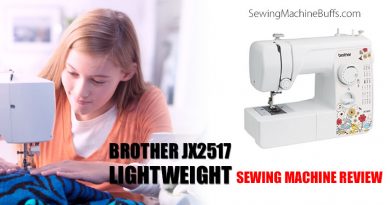 How To Attach A Snap-on Presser Foot 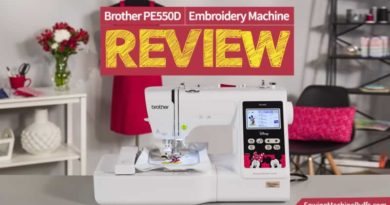