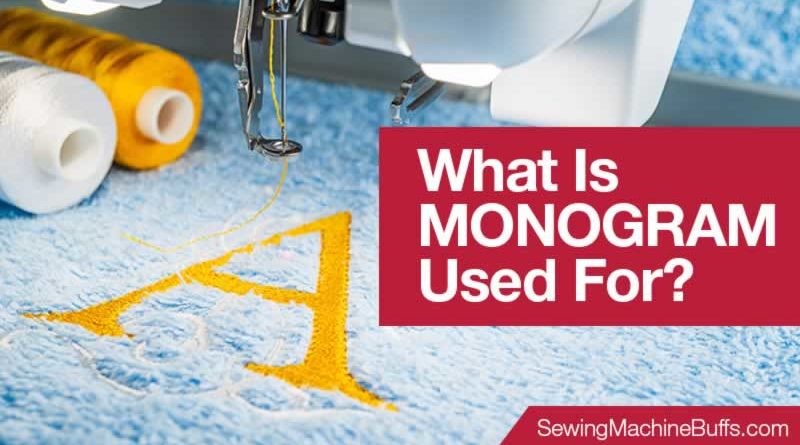 Monograms have been around for centuries. Since they became popular over 2000 years ago, their uniqueness has ensured they remained relevant to date. If you’re not sure what Monograms are or what they’re used for, read on to find out all you need to know about the design.

What Is Monogram Used For?

Monograms are a special kind of design that can be used to personalize gifts, linens and logo designs. Monograms incorporate 2 or more letters that are presented in a striking way to make a unique design. Usually, monograms consist of the initials of the first name, middle name, and last name of a person. From artists to sewers, people use monograms as a way of adding a stylish final touch to personalize their designs.

There’s basically no limit to how monograms can be used. We’ve seen them incorporated as a design in various unique ways. Below are some ways you can use monograms to personalize your creations:

To indicate Ownership: Monograms can be used to indicate ownership of items. People often have their initials monogrammed on their personal possessions to ensure they can be easily identified in case of theft or item loss. Traditionally, women had their initials monogrammed on cooking utensils, napkins and other items meant for the dining or kitchen. Most of those designs usually had the monogram on the top left of the item.  Also, people who rent out items often create monograms on them for easy identification.

As Logo Designs: Throughout history, monograms have been used for logo designs. In this case, the initials don’t necessarily have to be a person’s name. Products like wine, shoes, and glass cups can have the initials of the company’s name monogrammed on them. Many companies have their business name appear as a monogram. This can appear on official documents, company websites and other items to the company. A good example is D&G which is the initials and monogram for Dolce and Gabanna. We’ve seen the D&G initials on clothes, belts, bags and other fashion accessories created by this particular company. Another company that uses monograms as the company logo is LG which stands for ‘Life’s Good’. Not only does this company create a brilliant monogram from their name, but they also humanize their company by making the logo design appear like a face that’s smiling. The monogram does not only represent the company’s name, but it also tells a story.

On Artworks: Monograms have also been known to indicate intellectual properties for various works of art. Many artists in time past have used their monograms as a form of signature to indicate ownership of their artwork. This was particularly helpful as famous paintings and sculptures have been ascribed to the rightful owners even though many of them were created hundreds of years ago.

Linens: Napkins, towels, handkerchiefs, and towels can all be monogrammed with the initials of the designer. This could be used as a way to indicate ownership or just for beautification purposes. But in both cases, monograms look really impressive and might even add a touch of class, I dare say.

The history of monograms can be traced back to 350BC when they were first used by Greek cities as a way to authenticate coins. The first two letters of the issuing city’s name were joined together or combined to form a symbol.

Not long after, it became a status symbol and a way to claim ownership. Charlemagne is mentioned as a ruler who believed in using monograms to literally leave his mark on goods as a way to demonstrate his power and authority over conquered areas.

Unlike other fads, the use of monograms did not fade. Instead, it went on to become an acceptable way for royalty and the military to show their status and importance by monogramming their initials on things.

Monograms also grew to be used as a claim of ownership. Artists and artisans in the middle ages would sign their sculptures, paintings, and pieces of furniture with their initials to indicate that it belonged to them. Particularly during the period when there were measures against partaking in the trade without permission.

Following the progress of monograms, it was inevitable that it would advance to serve different purposes. Some of the more prominent roles monograms played include:

Christograms: The Chi Rho is the monogram of the name of Jesus Christ and a Christian symbol. The ‘Chi’ and the ‘Rho’ are the first two Greek letters in ‘Christ’, which might resemble an ‘X’ and a ‘P’ when described in relation to the English Language. When combined, these letters make a symbol that symbolizes Jesus Christ. It is common among Christians as a symbol of guidance and strength. This symbol was later adopted by the Roman Emperor Constantine I (r. 306-337).

The popular story goes that Emperor Constantine was anxious about leading his army into battle and so prayed to God for strength. On looking up into the sky, he saw the Chi Rho symbol and the Latin words “in hoc signo vinces” (which means “in this sign, you will conquer”). After this vision, he had yet another dream of Jesus telling him that the Chi Rho would protect him in battle. Naturally, he had the monogram put on his shoulders shield and went on to win the battle. To date, the Chi Rho is popular as a tattoo or ring among military men.

Royal Monograms: The medieval practice of signing a document with a special type of monogram or cipher is called Crismon or ‘signum manus’. This practice was prevalent in the Frankish empire from the Merovingian (relating to the Frankish dynasty founded by Clovis and reigning in Gaul and Germany c. 500–750.) period to the 14th century. Monarchs used monograms of their names as part of the emblem in public organizations, to signify a connection between them. An example would be as can be found on Police badges.

Symbol of Resistance in Wartime: The monogram of King Haakon VII of Norway is a remarkable example of a royal monogram. During World War II, Haakon VII spearheaded lead the Norwegian opposition to the German invasion, from exile. The Norway populace soon made the H7 into a symbol of solidarity and loyalty to the King. Drawing or creating the H7 symbol in Germany-invaded Norway soon became a crime punishable by imprisonment.

Likewise, during the war in Poland, the ‘PW’ was used as a symbol of resistance. Due to the peculiarity of its shape, the PW was known as ‘The Anchor’. It meant many different things and slogans, all of which stood against the Nazi occupation. As is to be expected, the use of ‘The Anchor’ was punishable by the Nazi authorities.

Modern Monograms: In the late 19th Century, the fashion industry appropriated monograms and made them into brand signatures. This signature or monogram logo is created by the combination of one or more initials. Monogram logos would go on to survive for a long time, even to this present day. Popular brands that use monogram logos include LV (Louis Vuitton), YSL (Yves Saint Laurent), Chanel, LG, Gucci, Hewlett-Packard (HP), etc.

How To Make A Monogram

There are 2 ways of monogramming:

Make A Monogram By Hand

The first step to take in your quest to make a monogram would be making a simple sketch of the monogram you’d like to embroider. This simple sketch should be designed to be as beautiful as you’d like the finished product to look.

Secondly, on your selected fabric, mark the area you want to place the monogram using tailor’s chalk or any other acceptable marking tool. Start by ruling a horizontal line on your fabric. This line would be a base for those letters that are not crooked. The bottom line serves the purpose of helping you create a mental image of how the monogram would look when finished, as well as making the transfer of the design to your fabric easier.

With the Use of a Sewing or Embroidery Machine

For a sewing machine to create a monogram design, it has to be one of its functions. Luckily, most modern sewing machines are engineered with this function. If you’re using an embroidery machine, switch it on and set it to the appropriate monogram size and shape you want. Choose the size and type of design you desire based on the machine’s instructions.

Select the part of the fabric you want the monogram to be placed and mark the centerline with a tailor’s chalk or any appropriate fabric marker. The centerline should be an intersecting vertical and horizontal line.  Because you’d be requiring an embroidery hoop, ensure the selected embroidery position is at a place with enough space around it to secure the embroidery hoop.

Following your machine’s instructions, attach the hoop to the machine. Make sure the hoop fastens into place so that it can move freely when the machine is in action. Run a final check to ensure that all is set; the embroidery hoop is in place with the fabric attached, there is sufficient space for the hoop to move about during the embroidery process and there are no obstacles in its way. Start the machine once you are satisfied that all is as it should be.

When the machine has completed the embroidering, remove the fabric and trim all unnecessary threads. Remove any extra stabilizer by cutting, tearing or washing as the case may be. Once that has been done, your monogram is ready.

Is A Monogram The Same As A Cipher?

The difference between a monogram and a cipher is that while a monogram is a symbol made by combining two or more initials of a person’s or company’s name, a cipher is made of uncombined initials.

Do Monogram And Embroidery Mean The Same Thing?

A monogram is a symbol or motif created by the combination of two or more initials. Embroidery, on the other hand, is the process of decorating a piece of cloth by sewing patterns on it with thread. Therefore, monograms and embroidery are not the same things though they are often used interchangeably by people who do not know better. 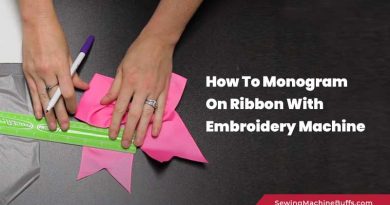 How To Monogram On Ribbon With Embroidery Machine 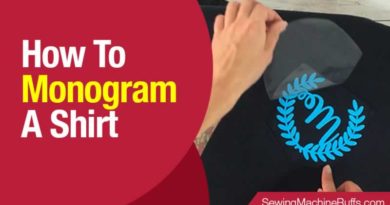 How to Monogram A Shirt With an Embroidery Machine 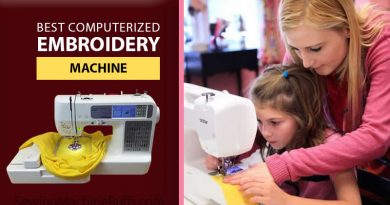